Hey! I'm Clare. I write about marketing and productivity strategies I carry out in real life, and share the results with you. Learn more about the journey so far >>

Are you overwhelmed by book marketing?

I'm creating a free training about how to think differently about your book marketing efforts.

It’s been a while!

You’re likely reading this on a NEW SITE! Earlier post-mortems (pre-2020) can be found directly on Faery Ink Press – new post-mortems will be here on this blog.

Lots has happened personally since my last show! I got married, I started a YouTube channel, there was a global pandemic…etc, etc. You all know how it was.

Now I’m back to doing in-person shows somewhat regularly, and so my post-mortems return! YAY!

You can still read my old post-mortems here. 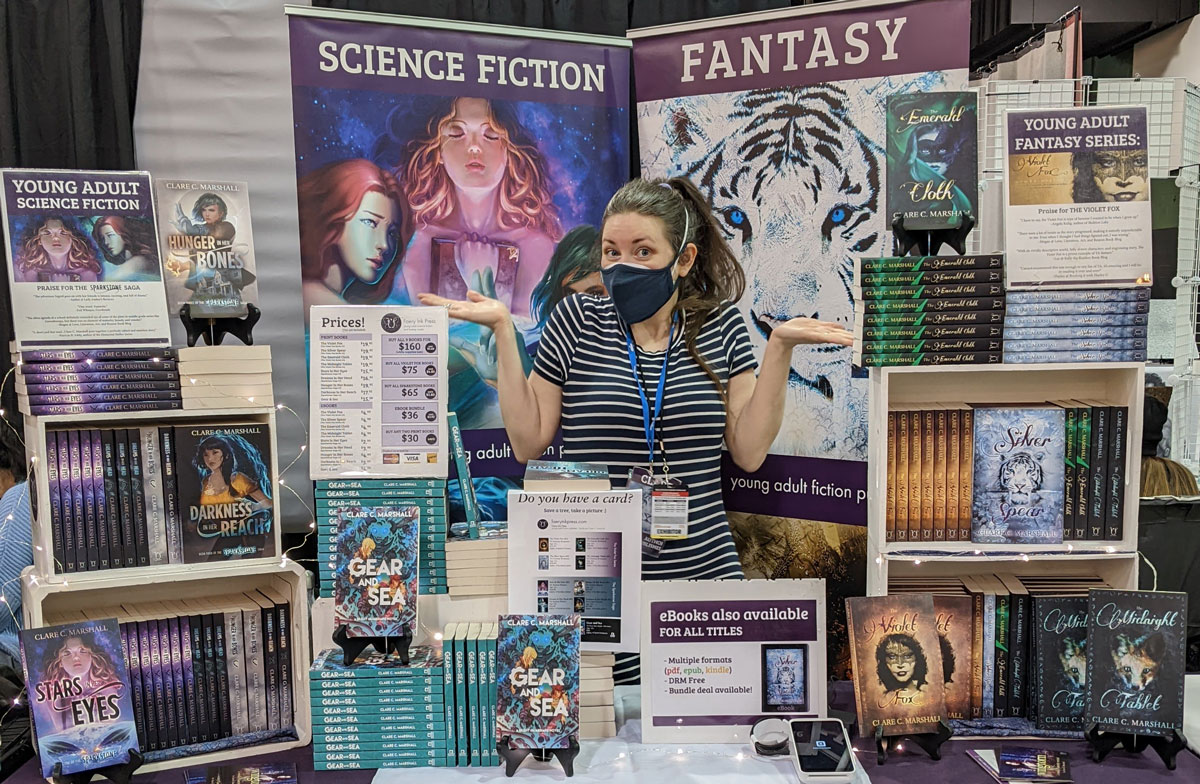 My friend Kate volunteered to help me move in and I gratefully accepted. She arrived on Thursday morning and we swiftly loaded the car. I thought, that was fast!

But when Kate started the car…nothing.

The car battery had died.

Fortunately, Kate had AMA and they arrived within five minutes to install a new car battery, which only took another ten minutes.

This could have gone a lot worse! We’d built in buffer time to our day, so we arrived at the Stampede grounds with plenty of time to set up and marinate before the show.

I was quite nervous. I hadn't sold books in person for two years. What if I had lost my touch? What if there wasn't a crowd? 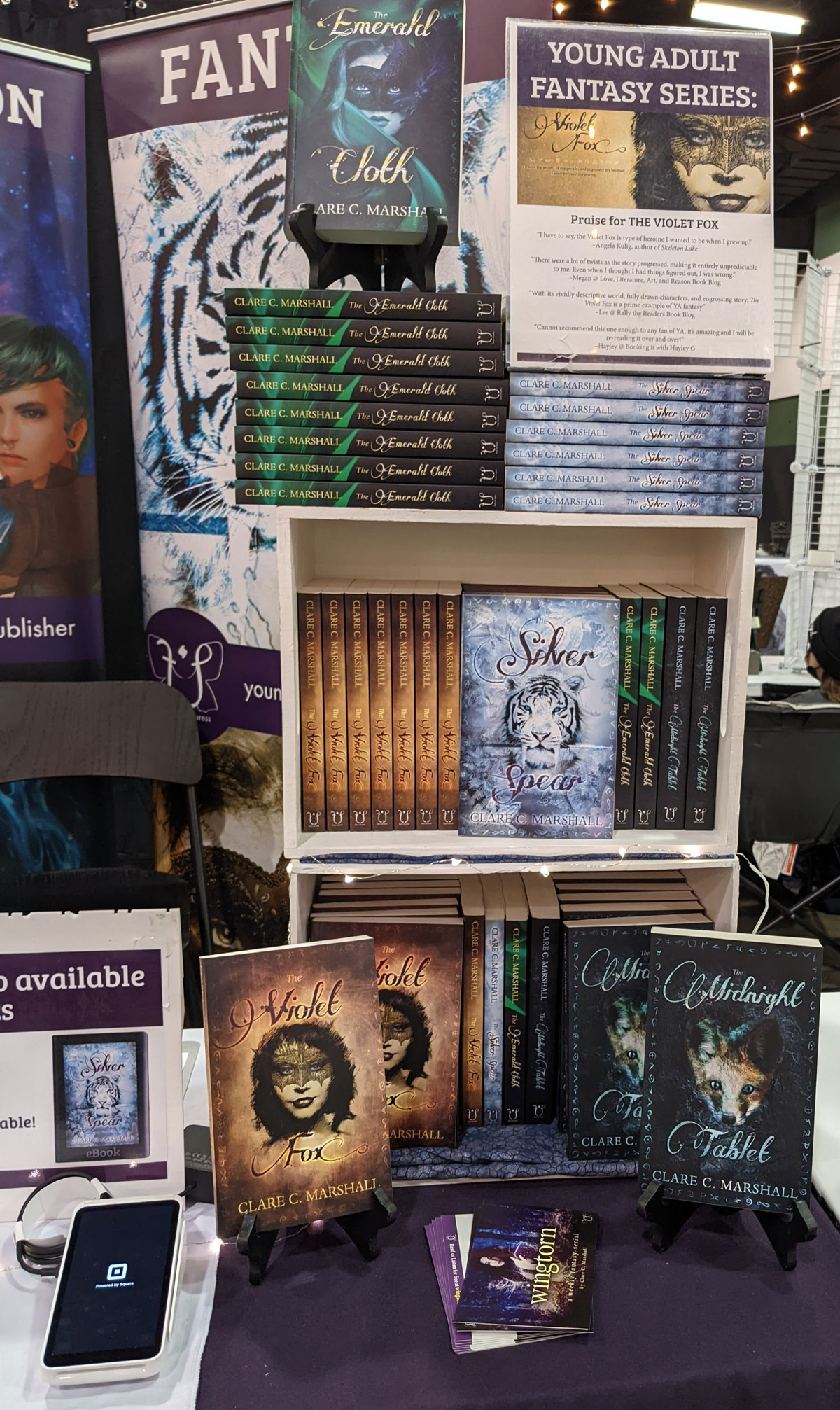 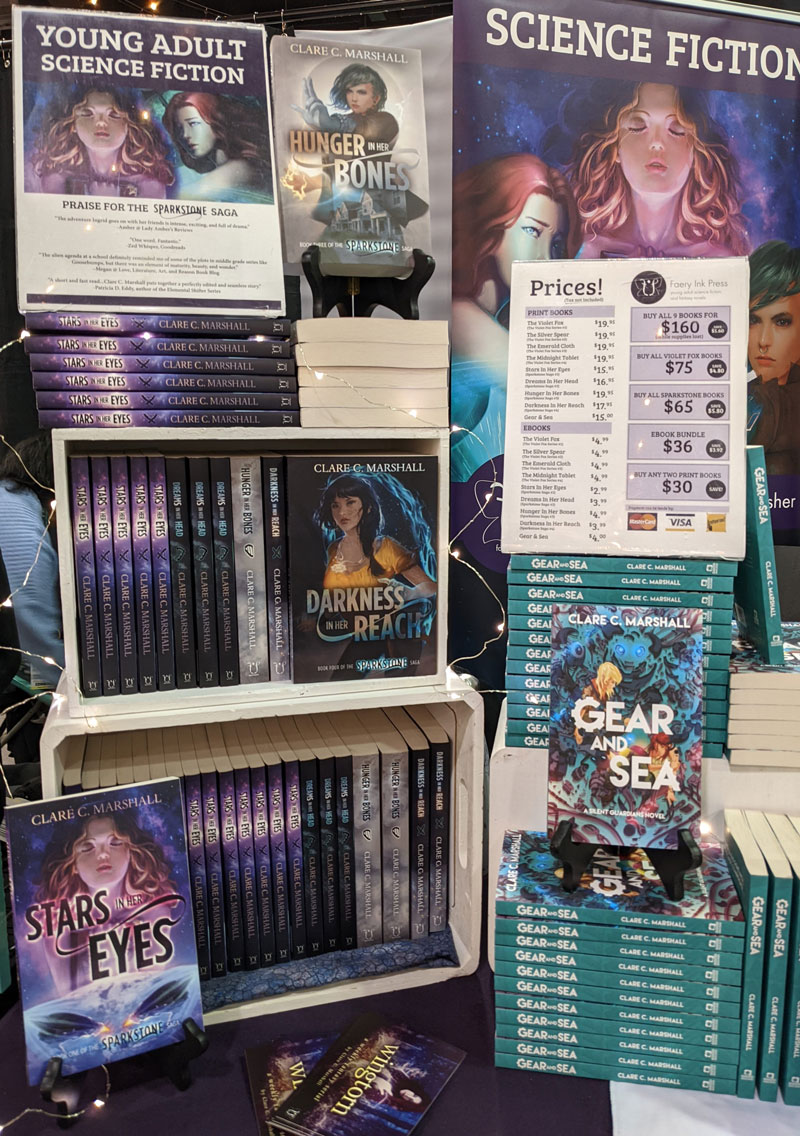 Fairly standard display if you’re used to seeing my comic-con set ups. I opted not to put a lot of facing-out books (see my Edmonton Expo 2019 Post Mortem for a colour blast to the face, with my face peering out from behind the stacks). I think this set up worked out fine. 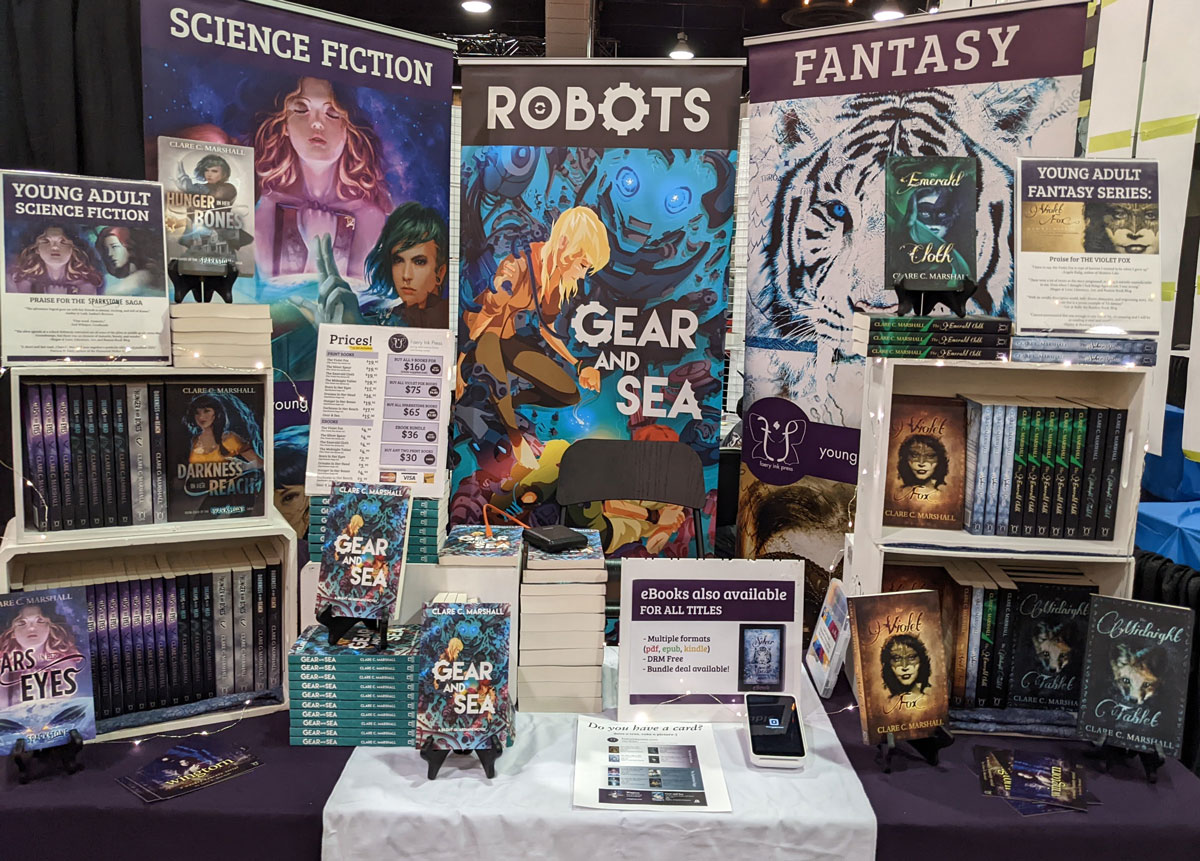 You’ll note I have three banners in some photos and two in others. WELL.

During set up, it took a while to figure out WHICH table was mine, as the organizers had written the table numbers with chalk on the floor…which as you can imagine, didn’t last long. There was an empty table to my left. It did not populate.

The jewellers to my right asked if I wanted to move my table down so we could split the empty space in half. I was amenable to this (although a little overwhelmed by the idea of re-setting up my display).

But come Friday afternoon,  because of the slushy snow and subsequent melt – there was a ROOF LEAK. Right in front of the jewellers’ booth.

Now, there was a leak in the SAME SPOT back in 2019 that narrowly missed my booth (this is why you always have insurance!). Fortunately, nothing was damaged for the jewellers, but it was a slipping hazard for customers. So we decided to move our entire displays down to the left. No expansion of space for anyone. But, I did take advantage of being on the end and put up the third banner. I think it looked really good, very professional!

About 75% of my sales were with credit or debit. This is a significant increase from pre-pandemic times. Most people took advantage of the tap feature.

Many people took advantage of my Two for $30 deal – and the most popular combination was The Violet Fox and The Silver Spear. The most popular individual book purchase was Gear and Sea, though The Violet Fox and Stars In Her Eyes weren’t far behind (tied for second). Folks who hadn’t pre-ordered The Midnight Tablet also came to grab that title, placing it in respectable third place.

I had a 16% increase in sales from 2019. Some factors contributed to this increase:

I don't think people bought more because of the "lost" two years. If anything, people knew what they wanted, and stuck to their budgets. My customers overall were a healthy mix of NEW readers and returning fans.

And, I have a “new” card terminal! 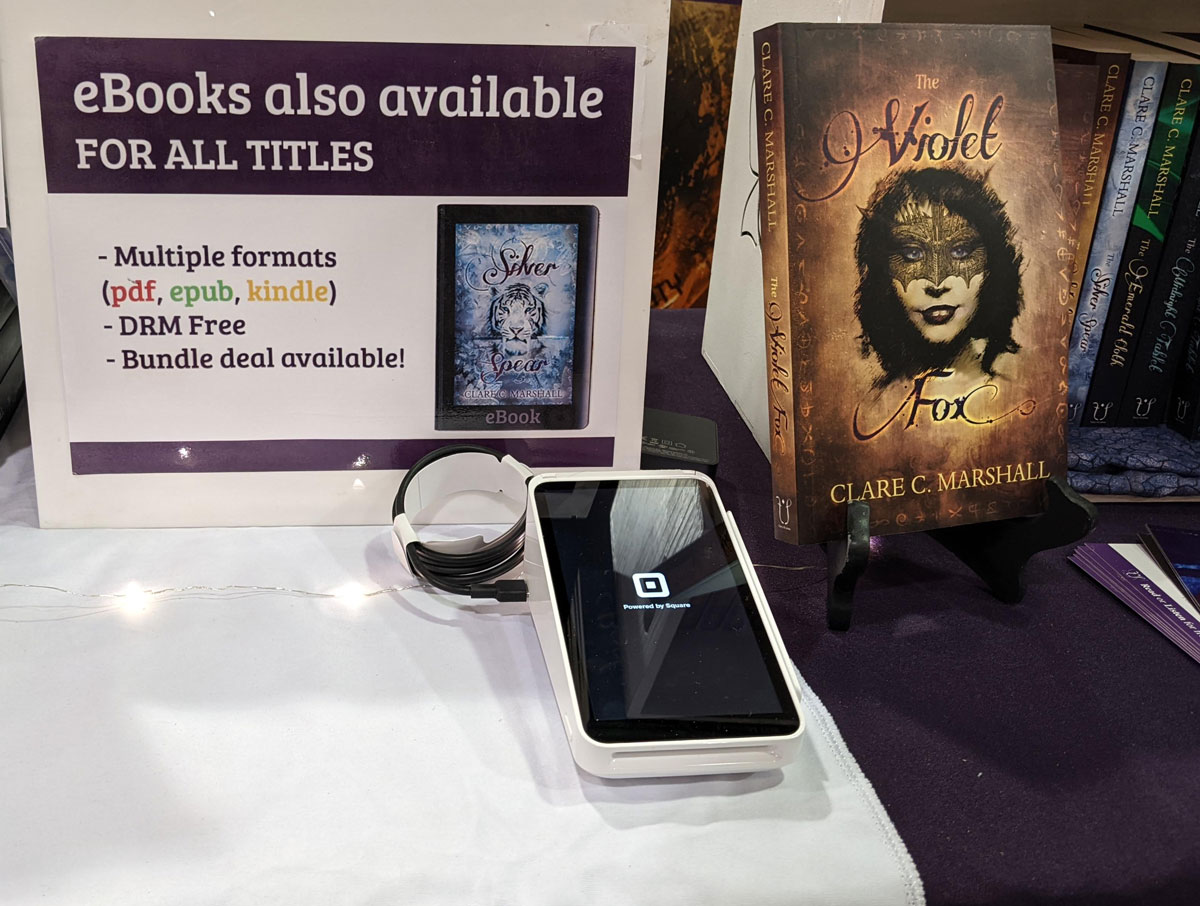 Switching BACK to Square

Wow, Square has come a long way in several years.

In November 2019, I decided to purchase the then-new Square Terminal for $299 CAD plus tax and shipping (and an extra $20 for a box of receipt paper rolls). My reasoning was I was doing several large Christmas craft shows and I was nervous that my Moneris reader would conk out, leaving me with no way to take payments. I had already been considering switching back to Square at that point and figured that having it on hand would be a worthy investment. (Now it's $399 for the square terminal alone.)

WELL. I booted it up once to set it up and it worked great. But, when I went to boot it up again to check things out, I received an error message.

It wasn’t until after Christmas that I was able to sort things out with Square and they sent me a replacement, no problem.

Because then the pandemic hit – and that replacement box remained unopened and a suitable monitor stand for the next two years.

I also cancelled my Moneris subscription during the pandemic because there’s no point in paying $20 a month for that when you’re not doing shows!

In April 2022, I opened the replacement Square box, booted up the machine, the software updated, and all was well.

Here are a couple of notes about using the Square Terminal:

I only had one issue with the terminal was on Sunday when it became mysteriously unpaired with my phone. Granted – the terminal doesn’t HAVE to be paired with your phone to work, as the Terminal in all-in-one system. I had paired it with my phone so I could ring up the transaction on the Square app on my phone and send it to the terminal, to reduce my touching the terminal’s screen.

So, it wasn’t a big deal, but it happened when I had two people in line! So it was a little stressful to find a solution and keep the customers engaged and happy.

She GIFTED me the cosplay and said I could work it into my display! Which I definitely will, for the holiday shows. I haven't taken a picture yet though you can see it in action here. The cloak is beautiful and she clearly put a lot of work into it!

I'm going to have to put my booth-designer hat on to give it a good showcase for Festival of Crafts and the Butterdome. THANK YOU!

Unfortunately I was unable to get postcards printed in time for the event, because of supply shortages. HOWEVER - I printed a large version of the card on regular 8.5x11 printer paper and told those who wanted a card to take a picture. Many obliged and even said that this was a better option.

“I can’t remember which book I have…”

A recurring, resounding chorus from many readers!

“Why can’t they just check Goodreads?” asked my husband.

BECAUSE, I replied – not everyone uses that tool for that purpose. AND, not everyone who buys reads right away, or they’re such voracious readers, they read and move on and can’t remember where or when the reading occurred!

I think I could solve this by turning ON customer tracking in Square (which saves customer purchase data in your account). I turned this off because I initially found the idea a little creepy (and as data privacy laws evolve, I want to be on the right side of history) – but I can see the value of being able to tell the customer, “Yes, you did buy Gear and Sea three years ago, you don’t have to purchase it today.”

Chasing the next level

I’m pursuing a formula: what’s the number of books I need, plus the display size, factoring in the expenses, to push sales to the next level?

My last “next level” was in 2016 when I pushed the display, and sales exploded.

Yet when I tried to push the display again in 2017 by moving to a larger booth, sales stagnated – because I couldn’t fill the space enticingly.

It’s never one thing that makes the difference. It’s a combination of factors. I have nine books on the table currently, several banners, a clean set up, and a more-or-less smooth technological experience for my customers.

Costs are only going to rise. The paper shortages are real and not insubstantial. And yet – the young book readers I’m running into prefer print copies, while the older readers have mixed preferences.

Even before 2020, I had planned to restructure my year to place my shows at Christmas, and keep the rest of the year (more or less) free for creation and any other interesting projects that arose. Now in 2022, I'm attempting to follow through on that original plan.

Pre-pandemic, I had also planned to reduce my client load so I could focus more on Faery Ink Press. That's still the plan...somewhat. I'd like to grow my YouTube channel (a new venture I'm very much enjoying!) and I want to develop this blog you're currently on. All of these projects focus on different audiences, though the common denominator is myself. I also ENJOY working on different aspects of my writing and publishing business - whether I'm writing about publishing and marketing, or improving a story, or selling YA fiction itself.

So, I don't know. I need to do a full year of shows to draw further conclusions.

It’s too early for me to comment on that – a full year of shows, including a Christmas season, will be most telling.

Here’s what I noticed:

Coming back to shows, the path forward seems clearer than ever. Selling books is a system I’ve mastered. My creativity is my job. I can bank on it. It’s like I’ve been wandering around in a fog and I’ve awoken from a long sleep to remember what it is to be excited about your work.

Will I go Back?

Calgary Expo is my home show so of course I’ll be there. Not sure where on the floor plan – but hopefully somewhere where the roof isn’t LEAKING!!

Thanks to everyone who came to chat with me during the show! It's NICE TO BE BACK!!!

Read my other post-mortems here. 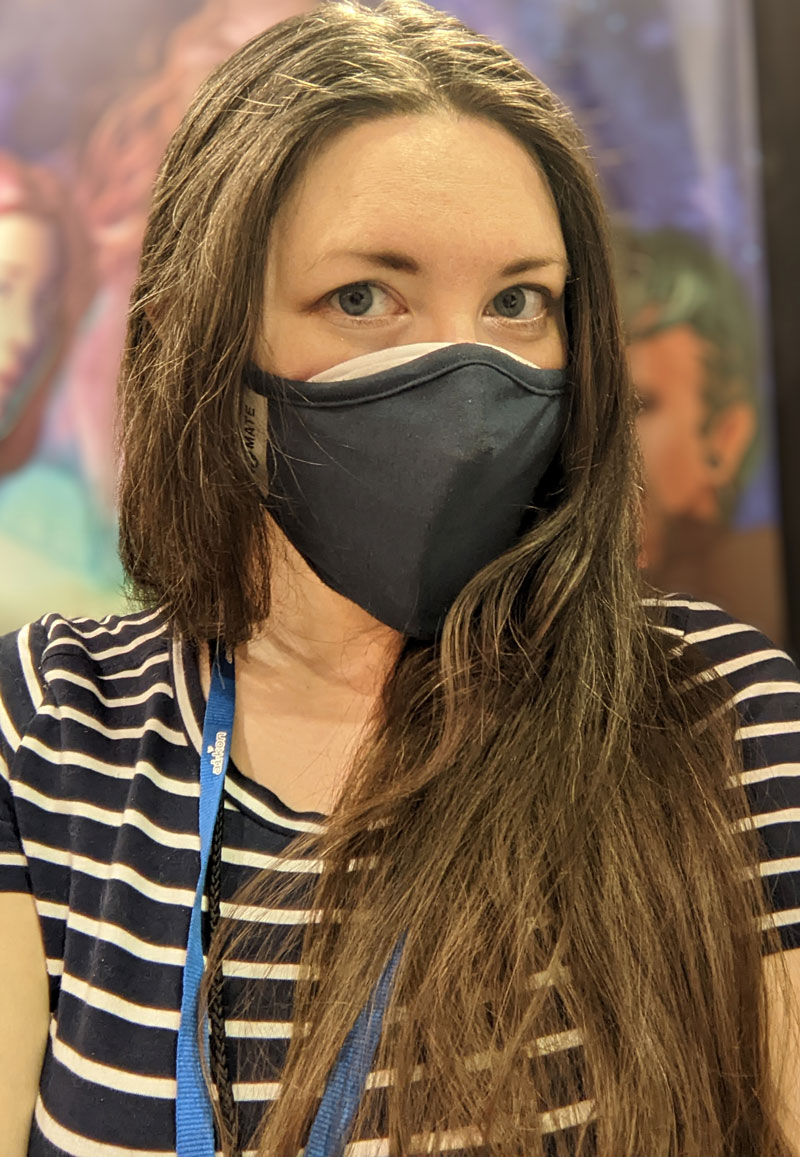 Should I Start a Podcast to Promote My Book?

Clare C. Marshall is the author/publisher behind Faery Ink Press. She blogs monthly about writing, publishing, marketing, and productivity at cmarshallpublishing.com.

Want to know more? Learn about the journey here.

Sign up for my newsletter to receive notifications of new blog posts each month as well as other useful information related to writing, publishing, and marketing.

Please log in again. The login page will open in a new tab. After logging in you can close it and return to this page.